get a little enrichment in your inbox

Fostering a Sense of Belonging Through Justification 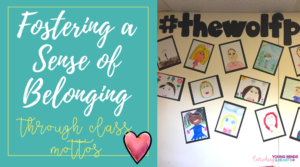 After moving from primary to upper grades this year, my whole class dynamic has changed. There’s less instructing and more facilitating. After diving into a resource that was provided by a teammate who is an upper grade extrordinaire, I decided to have my students come up with a class motto. I wanted to build a culture of teamwork and a true sense of belonging. We discussed how a motto is a way of life. It is something that we will take pride in, and live by, the entire school year.

As simple as it seems, it really is a complex idea and was not easy for my students to grasp at first. With a little prompting and a few examples, they were off and running. Once the activity had run its course, we had over twenty mottos to choose from. As always, there were five or so that were the most popular, and we were eventually able to narrow it down to two: #beyourself and #thewolfpack.

Here’s a little background on how these two mottos came to be.

I have a student this year (that I also had in primary), who is continually teased about his behavior choices, attire and demeanor. He has been called many names, which are absolutely meant to be mean, judgemental and hurtful. I obviously adore this student and my whole goal the first few weeks of this school year was to express that each and every student should always be themself. It is not only okay, but also important to be who you are. If you like pink and love painting your nails, then do it! On the flip side, we shouldn’t make fun of, judge or criticize anyone for being themself. No matter what our thoughts and opinions are, we don’t need to put those on others. We are all different and it makes our lives so much more fulfilling.

We are an AVID school where we promote college going students. I am a graduate of UNR (University fo Nevada, Reno) and our mascot is the Wolf Pack. As an AVID call and response attention getter I call, “Wolf” and my students respond, “Pack”.

After the final vote on what our class motto should be, the results were 75% #thewolfpack and 25% #beyourself, which surpised me. Not only did I think #thewolfpack was more of a mascot than a motto, I am on a #beyourself crusade after having multiple students throughout the years that have been treated unfairly for simply being who they are.

As an adult, my first instinct was to tell them that #thewolfpack is more of a mascot, and have them choose between #beyourself and #beMoorekind (the runner up. and hybrid of our school motto and my teacher name). But as I was figuring out my new upper grade normal, I decided to have the students write down their justication as to why they chose the motto that they did. I’ve always known (and/or been told) that having students justify their thinking was a crucial part of their learning experience. What resulted from this activity sealed that ideal for me.

The majority of my students wrote justifications that I could have predicted. “I like #beyourself because people shoudn’t change who they are for someone else” or “#thewolfpack because wolves are part of the dog family and I like dogs”. Then came the justications that made this whole process more meaningful than I could have ever anticipated. “I think it should be #thewolfpack because wolves have a serious focus when they are hunting like we should have a serious focus when we are working in class” and “I like #thewolfpack because wolves stick together in a group and always have each other’s backs. That is how we should be in here” and “#beyourself is more focused on you alone. #thewolfpack makes it seem like we are a group that is together and we should work together in here. We shouldn’t make our teammates feel alone or work alone”.

Wow. WOW! Not only do I no longer think #thewolfpack is just a mascot, I am beyond glad that I had my students justify their thinking. As adults, we are quick to judge their answers. We assume we know what the answer ‘should’ be or what our students ‘should’ be thinking. This activity proves that the power is in the justification. Not only have I helped foster a sense of belonging for my students, it became two-fold when I allowed them to justify their rationale. Powerful stuff. And something I will continue to do more and from here on out.

Now that I think about it, when fostering a sense of belonging, wouldn’t you want to be part of a pack? Belonging to a group that supports you, and is there for you? So obvious. This is one of those lessons where I think I learned more about myself as a teacher than the students did. 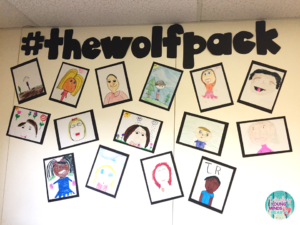 You may also enjoy...

get a little enrichment in your inbox 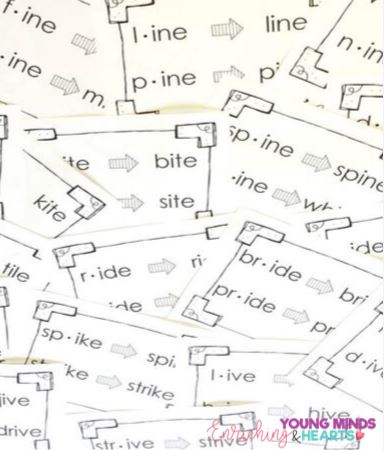 How to Teach Chunking to Help With Reading Fluency 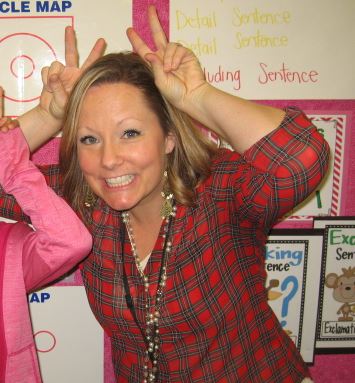 The Girl Who Said She’d Never Have a Blog

Have students who have already met the standard you are teaching?

Need ideas on what to do with those students?

Need something else for them to work on rather than sitting through the whole group lesson?
Yes, I do!